As of now, the retrofit SmartTOP convertible top control by Mods4cars is available for the McLaren 12C Spider. It allows the roof to be opened and closed while driving via One-Touch.

After installing the SmartTOP module, the McLaren driver is able to open and close the top while driving, with One-Touch. A tap of the console key is sufficient and the movement of the hood is carried out automatically. The driver therefore has both hands back on the steering wheel faster.

In addition, the soft top can be operated remotely via the existing vehicle key. A key combination on the vehicles remote control sets the hood in motion. “The SmartTOP customer can open their top as they move toward their vehicle and start their drive open. A time saver!” continues Sven Tornow.

Upon customer request, the function “button reversal” was added. Thanks to it, the operating direction of the top button can be inverted. Starting and stopping the engine does not interrupt the current top movement. The SmartTOP module can be completely deactivated if required.

All functions can be programmed according to personal wishes. Thanks to a USB port attached to the module, the configuration is easily made via the PC / Mac. In addition, the USB port enables software updates and feature enhancements to be installed, which are provided, free of charge, by Mods4cars.

For easy installation, the SmartTOP roof module comes with a plug-and-play cable set. The specially developed adapter has connectors in OEM quality and ensures a simple connection between vehicle electronics and SmartTOP module. No cables need to be cut, ensuring a traceless removal is possible at any time.

A demonstration video can be viewed here:
http://youtu.be/n-kXW6_yJ0A 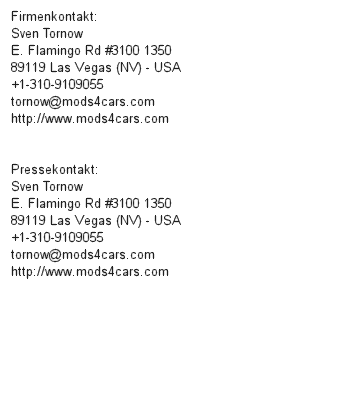