The response to the competition for the August Sander Award donated by Ulla Bartenbach and Prof. Dr. Kurt Bartenbach was excellent. Die Photographische Sammlung/SK Stiftung Kultur received more than 160 national and international contributions from artists under 40 years of age, including some from America, Austria, Brazil, Germany, Italy, Iran and the UK. Following intensive discussions among the members of the jury, a short list was drawn up from the numerous entries, and one of these photographers will be awarded the prize:

April 24, 2018 we will announce the winner of the August Sander Award. The ceremony will take place September 6, 2018, in the context of the opening of the exhibition “August Sander – Master works. Photographs from People of the 20th Century” at Die Photographische Sammlung/Stiftung Kultur in Cologne.

Starting in 2018, the August Sander Award will be conferred every two years. The prize is designed to promote young, contemporary artistic approaches to objective and conceptual photography. The prize was named after August Sander (1876-1964) because Die Photographische Sammlung/SK Stiftung Kultur holds in its August Sander Archive the largest collection of original works by that artist anywhere in the world. In honor of Sander”s significant portrait photography, the photographic works submitted by the applicants should primarily revolve around the theme of portraying people.

Press images from the nominee”s series can be downloaded using the following link: http://bit.ly/2pN0Ra3 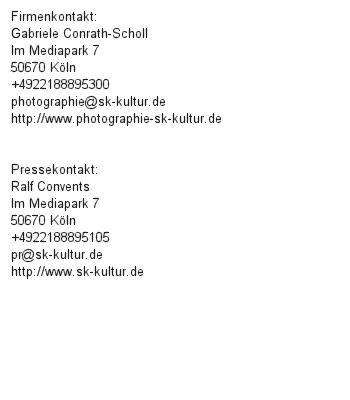